CEED scientists work closely with hardware vendors, algorithm and software developers, and collaborate with application scientists to meet their needs. Our co-design efforts are organized in four interconnected R&D thrusts focused on these customers and tied together by the foundational finite element thrust. 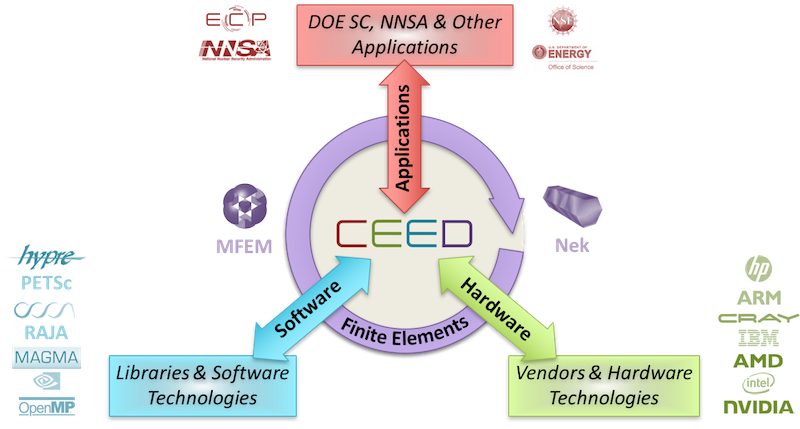 The specific goals and responsibilities of each thrust are described below. You can find our publications and related documents on the Outreach page.

The goal of CEED's Applications thrust is to impact a wide range of ECP application teams through focused one-on-one interactions, facilitated by CEED application liaisons, as well as through one-to-many interactions, based on the development of easy-to-use discretization libraries for high-order finite element methods.

The goal of CEED's Hardware thrust is to build a two-way (pull-and-push) collaboration with vendors, where the CEED team will develop hardware-aware technologies (pull) to understand performance bottlenecks and take advantage of inevitable hardware trends, and vendor interactions to seek (push) impact and improve hardware designs within the ECP scope.

The goal of CEED's Software thrust is to participate in the development of software libraries and frameworks of general interest to the scientific computing community, facilitate collaboration between CEED software packages, enable integration into and/or interoperability with overall ECP software technologies stack, streamline developer and user workflows, maintain testing and benchmarking infrastructure, and coordinate CEED software releases.

The goal of CEED's Finite Element thrust is to continue to improve the state-of-the-art spectral element/high-order finite element algorithms and kernels in the CEED software targeting exascale architectures, connect and contribute to the efforts of the other thrusts, and lead the development of discretization libraries, benchmarks and miniapps.